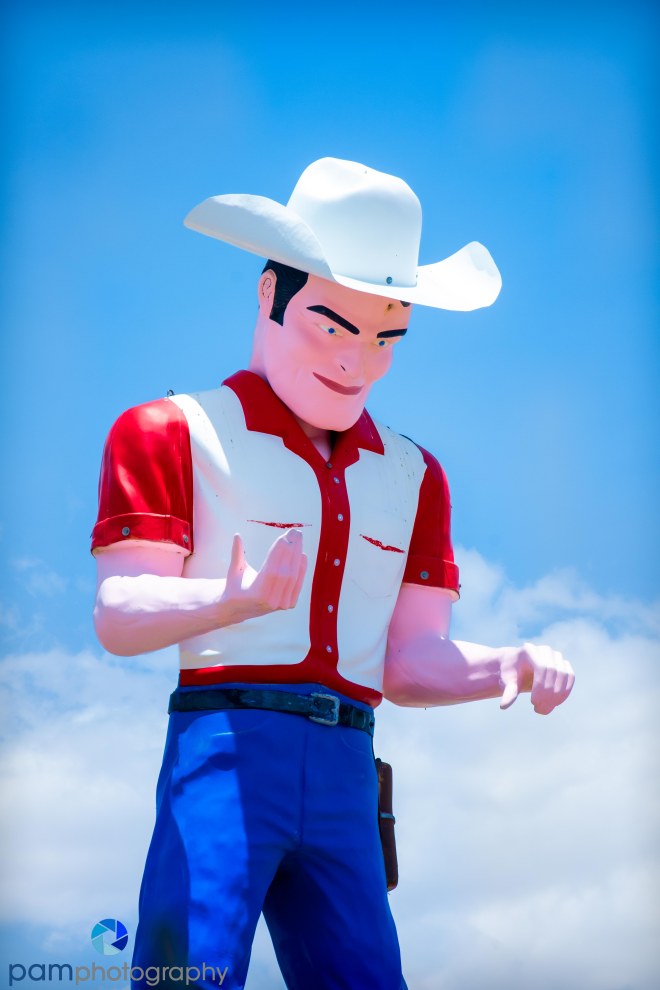 Mary and I have been informally photographing “muffler men” that we have come across for years, without starting an actual project or chase to photograph all of them. There are approximately 180 known muffler men. This cowboy is at John’s Used Cars on Route 66 in Gallup, New Mexico.

Around 1962, International Fiberglass Company in Venice, California made the first giant, a Paul Bunyan, for a restaurant in Arizona on Route 66. Soon, word spread as to how very effective this giant was at attracting people and the popularity quickly took off. In the 1960s and 70s, most of the original giants were scuttled and lost. There was a resurgence to save them in the last 20 years, but alas, the original molds have been lost and we only have a few left to enjoy and appreciate.

One of the most important tools you have as a photographer are your legs. You have to keep moving around a subject to see if you can frame it better. I walked to the left. I walked to the right. I walked toward him and I also walked back to try and get a clear shot of him.

I then asked myself what is the subject and how best to convey it and frame it? Once I concluded that I really could not include his legs with all of the crap around him, I worked on a composition that included two-thirds of him. By the way, if you ever have to eliminate limbs in a photo, always crop at mid-limb and never at the joints. It looks a lot better that way.

Finally, I was able to pretty much isolate him with just the guide wires which I removed in photoshop. I also thought he would looked better when bright colors and more sun than was out that day.

Roadside America has a great couple of pages about muffler men, including a map.

To see more of and buy our photographs, please go to www.pamphotography.com and check out more of our photos on FLICKR.